Watching the news of the continuing destructive force of Hurricane Harvey brought back memories of Super storm Sandy. We were all affected by Sandy in more ways than one, but Harvey brought more continuous rain than anyone expected. Harvey also brought back memories of Hurricane Katrina and Floyd, and the incredible destructive power of too much water.
When hurricane Floyd struck this area in 1999, one of the hardest hit areas was Bound Brook. I went there a few times not just to see the destruction, but also to determine how our parish could help a family who lost pretty much everything. Seeing the water lines in the houses, and smelling wet wall board and bleach only reminded me of what the people of Houston are experiencing as they go back to their homes to try to salvage whatever they can. The response to this storm has been incredible, as it is in most storms like this. People are always willing to help, no matter what, because it’s part of the human psyche. There will be a second collection next weekend for the victims of Hurricane Harvey, and the monies collected will be sent to the archdiocese and probably given to Catholic Charities.
This week school begins at Saint James and in Springfield. As the new school year begins, it is always a good sign to see the children return with an eagerness and willingness to learn. Reminder: as you drive around town and the area, please be aware of the school buses and the children walking to school. We want to keep them all safe for the new adventures that await them this year.
Tomorrow is the 16th anniversary of the horrific events of 9/11 (2001). We all know where we were and what we were doing when the Twin Towers were struck by the two planes. As far as we have come in these 16 years, the memory still tells us it was yesterday. I was celebrating 8:45 am mass in Bayonne when the first plane struck the tower, and didn’t find out what happened until I returned to the rectory and the secretary told me. I went upstairs and put the television on, and then saw the second plane strike the other tower. Then I went to church and tolled the bells all day in memory of all those who were killed.
There are a number of Memorial Services tomorrow. As I have done for the past number of years, I will lead the Memorial Service in Bayonne, at the Teardrop Memorial at Harborview Park. Eleven citizens from Bayonne died in the planes, two of whom I knew. It’s always a touching service, especially as the names of the Bayonne resi- dents are read.
Harvey and 9/11. Two different experiences and yet both remind us of the frailty of human life and the need to be vigilant and to care for one another.
A PEACEFUL 9/11!!
~ FR. JOE

We began Sunday liturgies last week, and all went well. Some folks who had not been in the church previouslywere surprised to see how the church was configured. I spoke to the congregation before each Mass, except the12:00 Noon Mass because there were few parishioners there, and I asked everyone to leave the church andsocialize… 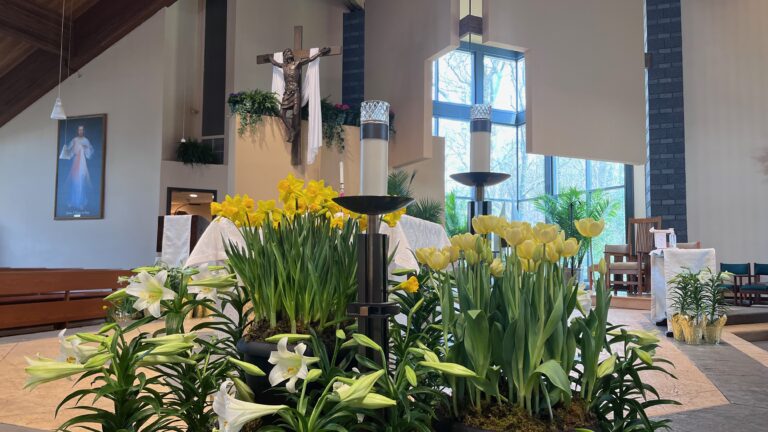 He is risen! The dramatic action of the Triduum climaxes today with the first reports of the miraculous news. He is not dead! He has been raised!

This has certainly been an interesting year. First, there is the pandemic that kept many of us home for a while,with some people still remaining at home. Then there was Tropical Storm Isaias, which wreaked havoc in NewJersey and other states. Half the Town of Springfield had no power for a few days, including the…

“COVER US, LORD, WITH YOUR MERCY. BE OUR PROTECTOR AND KEEP US FROM THE DANGERS WITH WHICH OUR SIN SURROUNDS US. BE OUR LIBERATOR AND SET US FREE.” A Lent Sourcebook: The Forty Days, Book Two, p. 59 It seems that Lent is just lying by, and we are trying to keep our focus on…

Webegin the month of October hoping that the coronavirus does not affect us asbadly as it did in the spring. The difficulty is that as the weather getscolder, we have to move our outdoor activities inside. We have to be even morevigilant about following the protocols to keep us all safe. Jesushas given us all…

During the past week or so there has been a lot of discussion and reaction to the fact that President Trump and his wife tested positive for COVID-19. Reaction to his diagnosis has come from across the country and around the world. The president has underlying conditions that make him more susceptible to the virus,…